John Cage used the word approximation “because a measuring mind can never finally measure nature.” Even though the random elements in our world are supposedly about the absence of logic and reason or about elements without a definite aim or pattern, everything tends to fall into patterns. Or is it perhaps so that we humans have the ability to create patterns, meaning and coherence?

We measure, we construct common laws, we try to control and explain. When something breaks the existing boundaries - we simply create new explanations.

Randomness within art broke the barriers of how things must be and made our perception - or acceptance - wider, and we found new approaches to experiencing art. For the  exhibition Paper, scissors, stone, four artists use paper as the common material, but their work also allows one to explore different notions of randomness.

Paper, scissors, stone is a hand game played by at least two players. It goes by many different names, but all have a circular pattern in common - A is beaten by B, B is beaten by C, and C is beaten by A, or: paper is cut by the scissors, scissors are broken by the stone, and stone is trapped by the paper. The game is simple to play and easy to understand and often used as a choosing method, just like throwing dice, where you let the random result determine your choice between different alternatives; historically, random games have often been used for objectively deciding small issues or even entire destinies, either as an exciting way to live or as a way to break life patterns.

In essence, there are two different concepts to randomness: the randomness we find in natural phenomena and randomness as a scientific concept where we try to construct randomness from equations. Through generalizing nature into common laws, we try to control and hand down the knowledge about the randomness that exists around us. We cannot explain why that fluffy cloud has a specific shape, but we know why there are clouds, what they are made of, and when they are going to appear. Visual randomness is viewed at as a notion of patternlessness, originlessness, or meaninglessness. However, patterns, origins, or logic most certainly do exist, even though they might not be immediately obvious, especially if they are presented in a way that we are not accustomed to.

The random elements within the arts shifted the focus from technical mastery to more intellectual levels of perception. The tradition of randomness goes back to for instance Alexander Cozens “New Method” where blotting – stains or accidental forms – suggests the shape of the final artwork, the techniques of the Dadaists, the automatic painting by the Surrealists, and the ready-mades by Marcel Duchamp. This challenged the viewer to deal with new ways of creating meaning from, until then, uncommon approaches to experiencing art.

While pure randomness is still searched for by scientists, the game of paper, scissors, stone is played by humans and therefore it can never be a truly random method. We always tend to create or find patterns; there exist numerous methods and theories on how to gain a significant advantage in the game. These four artists use paper as the common material – but their work also let one explore different notions of randomness.

Andreas Zymvragos is fixating the randomness of nature, like in a still image; natural phenomena like the clouds or the waves follow a specific pattern decided by their own matter, but are never exactly the same. Barbara Knight lets the packages that she comes across from her different travels be the raw material of her collages and decide the final form, positioned on a larger paper almost randomly, creating abstract compositions. Antonis Choudalakis’ technique with ink does not allow even one line to be somewhere where it should not be. At the same time he draws his inspiration from random faces he collected from newspapers during his stay in Stockholm which he combined with cabinet portraits of Swedes from the 1890s. SofiaVlazaki´s compositions, which might look random at first glance, give the viewers narrative resources for creating their own story, always originating from the performance of children playing.

Randomness exists within all things, but under given rules. There are certain frames or boundaries wherein randomness is granted certain space. Here, for the purpose of this exhibition, paper is the material, and the gallery and a galleries specific discourse is the general frame - within an artistic field that is commonly considered as a continuous boundary breaker in itself.

Without ever positioning her figures in any particular room or space, Vlazaki´s narrative compositions create free associations for the viewer to figure out, according to his or her own imagination. The arrangement of the contents in the drawings is created by the state of mind of the artist in the particular moment she is working with them, always with distinct detail for every line. Her artistic world, inspired by the playful and imaginative nature of children, is enlivened by the wealth of material provided by her own and her sister’s childhood drawings, as well as other childrens drawings. Other influences include the psychologist Winnicott’s writing, in which he states that “Cultural experience begins with creative living first manifested as play”, but also, as in this particular case, the history and the objects of the Bath House of the Winds in Athens where the drawings where first put on display.

Born in Chania but living in Athens, Sofia Vlazaki studied fine art and continued with studies in drawing, illustration and book art in UK. She teaches Book Illustration at T.E.I in Athens and is well known for her drawings to the Cretan crowd.

Through a personal nomadic life where the packing and unpacking of belongings is connected to feelings of displacement, as well as a more general and bigger picture of people, capital and products that move in a globalised world, Knight transforms functional ordinary by-products into works of art. Raised during the Second World War with the mindset of reusing and collecting, Knight is travelling as an explorer nowadays, seeing the beauty in what others consider as ordinary or even trash. Juxtaposing found fragments of objects with other fragments to compose a unity, the artist, almost unconsciously, lets the influence of her surroundings create patterns and then turns them into abstract forms.

Originaly from England but living in New York, Knight travels to Greece and Chania on a steady basis. Started as a graphic designer, she now uses photography and collage as her main medium and have exhibited mostly in New York but also in Athens and Berlin.

This series of drawings, created in Stockholm, evolved from a research of memories of places where the present is understood through the past and a belief that the history of a place shapes our lives today. Using the creation of the modern nation states in Europe in the middle of the 1800s as a starting point, the work combines cabinet portraits of Swedes from the 1890s, taken from the Nordic Museum’s archive, with random faces from today's Swedish press. The approach, being more spiritual than rational, scratches the surface of a supposedly successful model of a society and its people, and forms a question on the notion of national and cultural identity.

Antonis Choudalakis, living in Chania again after some years in Athens and Stockholm, received a scholarship by B & M Theocharakis Foundation in Athens for his drawings. His work, always being anthropocentric, started from the heavy material of fresco to end up in these airy and fragile drawings with double layered papers.

Andreas Zymvragos’ drawings resemble cinematographic frames, almost as a backdrop for the daily life to exists against, perhaps slightly metaphysical and more dramatic than reality. In his effort to capture the ephemeral and the continuous alteration, he uses the flow of nature, be it the calm sea to mirror oneself, the turbulent waves or the appealing clouds, as symbol for something else, the feelings of transformation, the passing of time or the randomness of the movement. The variations of nature are endless but always recognizable in its form, with a rhythm that is directly connected to the rhythm of the human body.

Andreas Zymvragos, born in Chania, is also a classical pianist with studies on classical piano and music theory. His work can be found in private collection all around the world and he has four solo exhibitions and numerous group exhibitions in his experience. 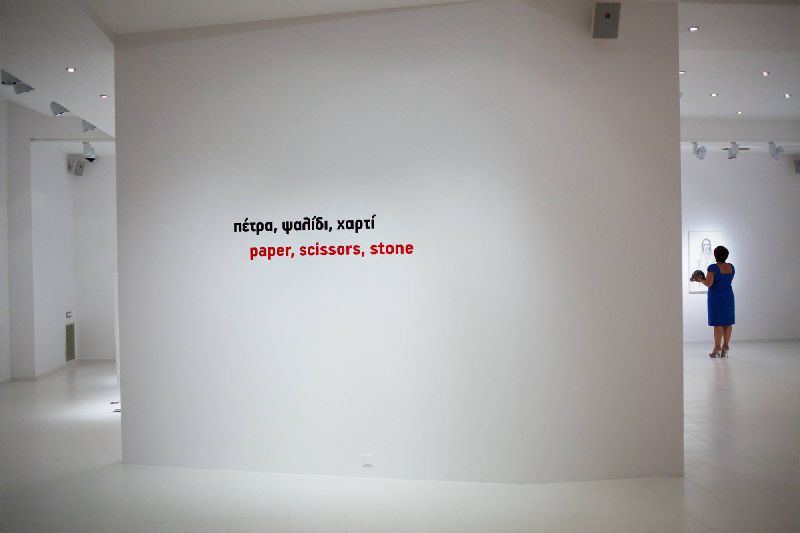 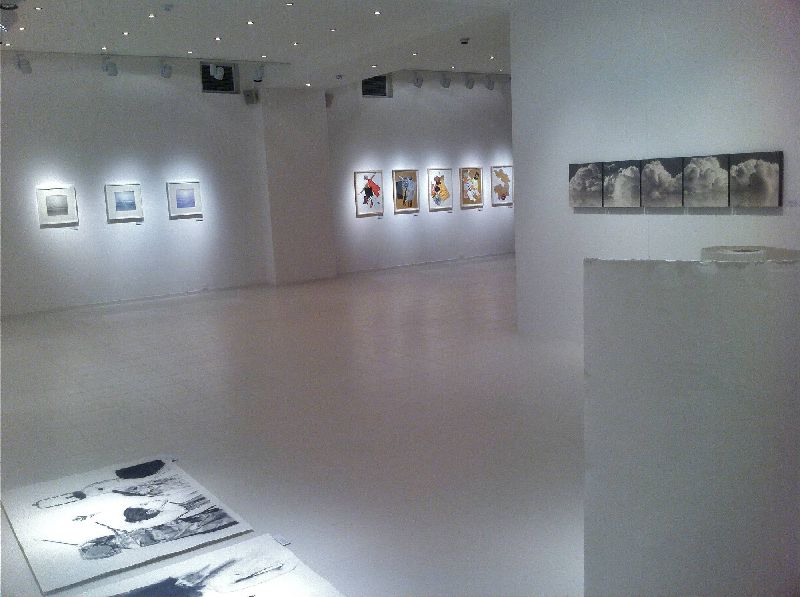 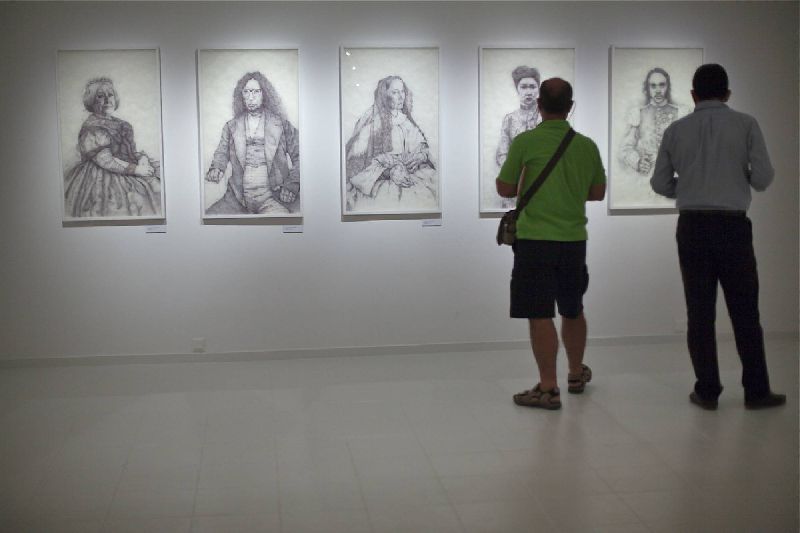 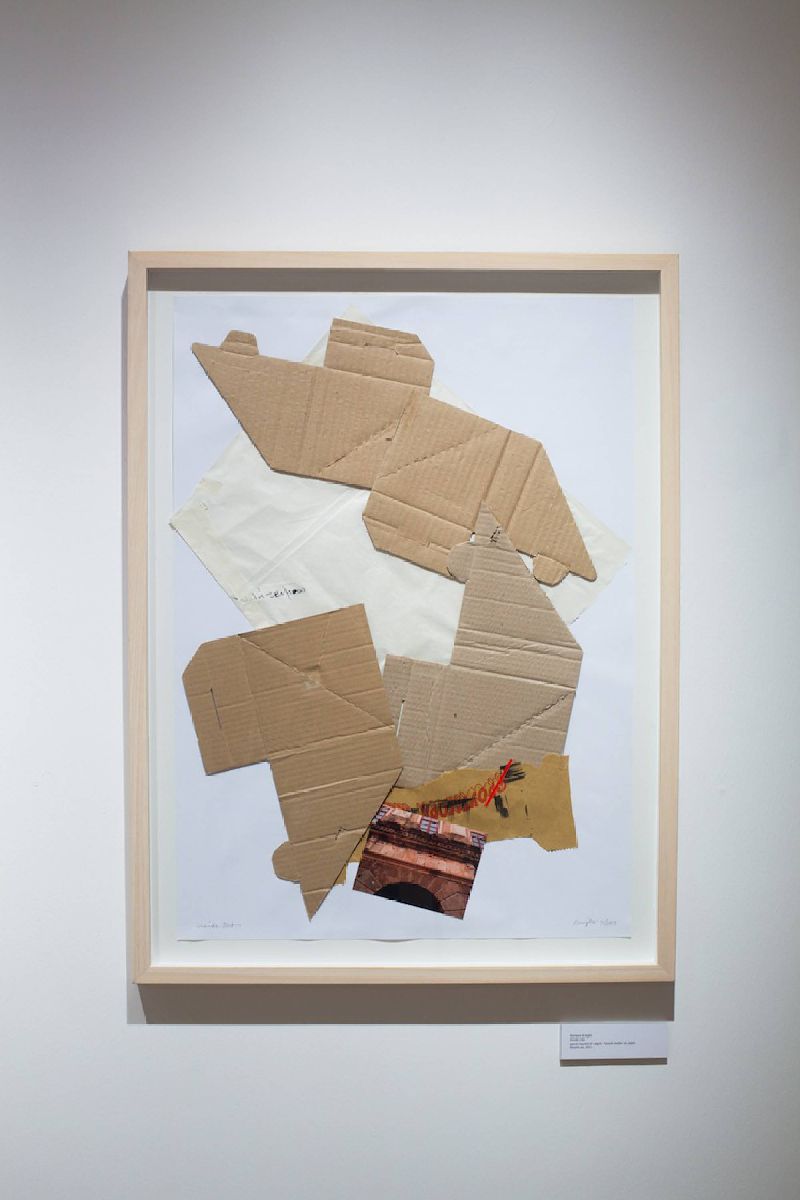 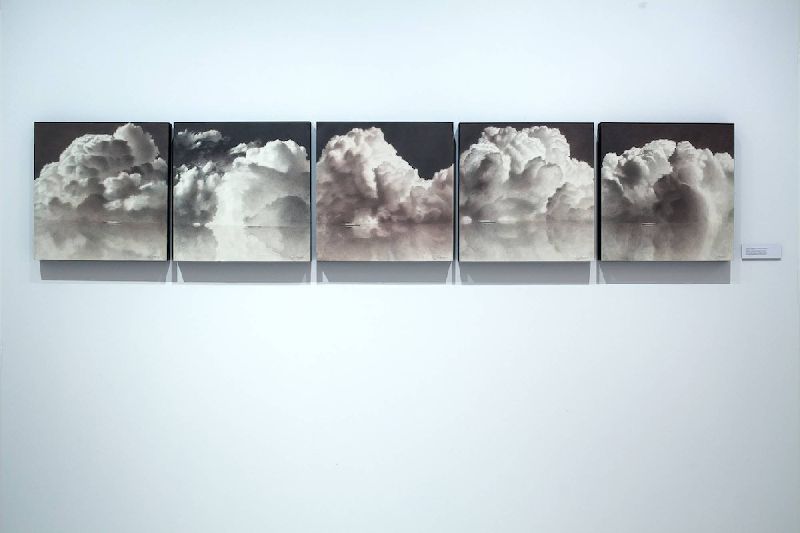 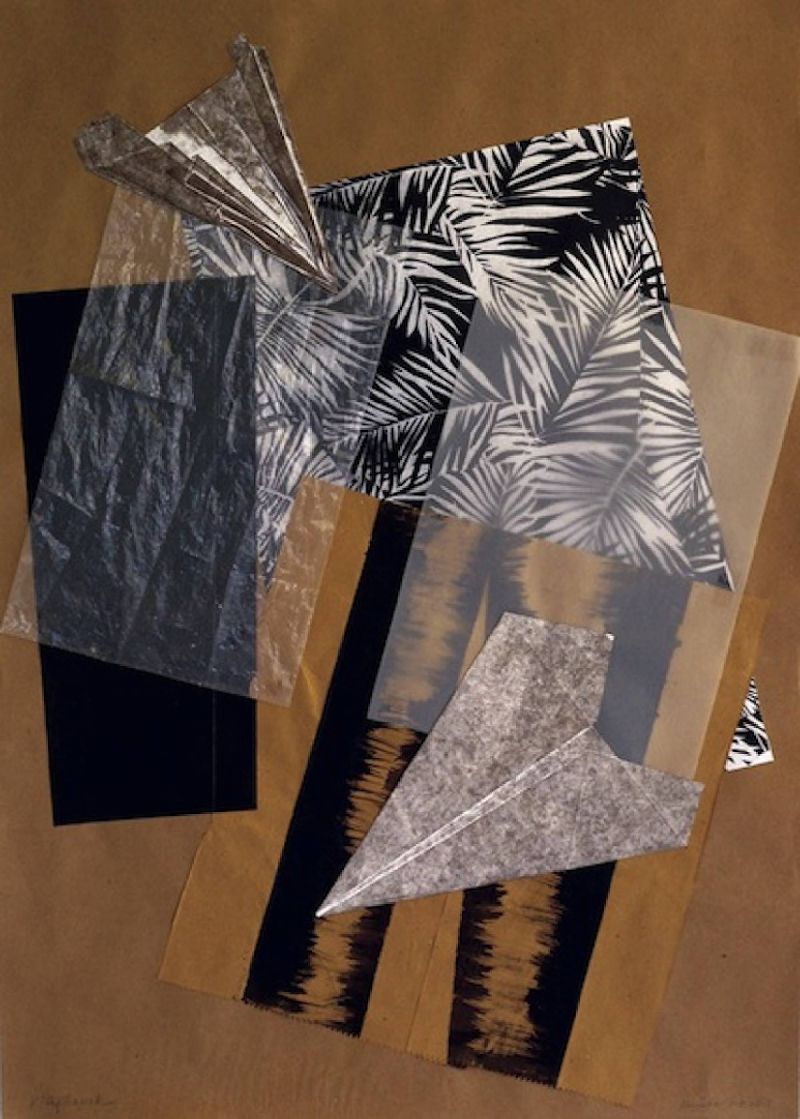 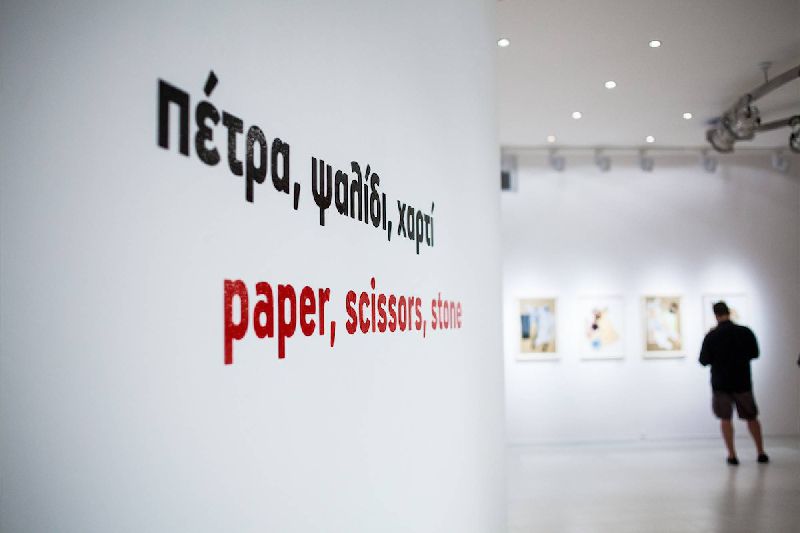 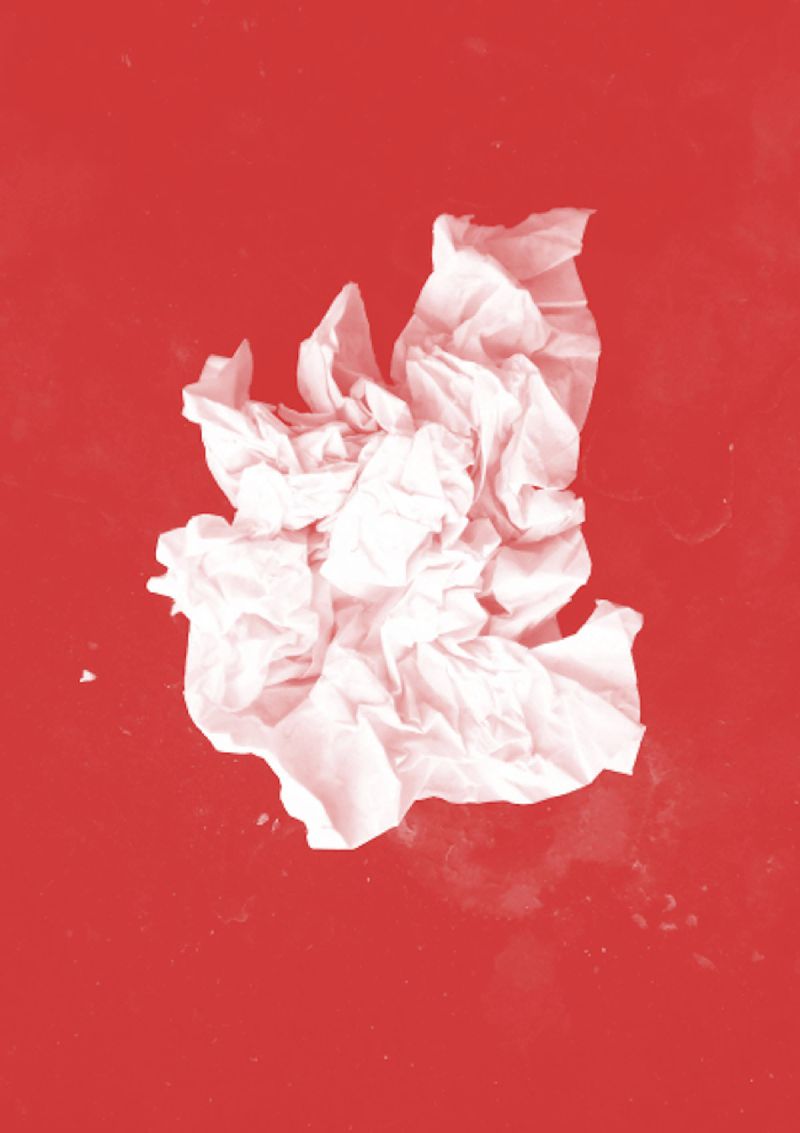 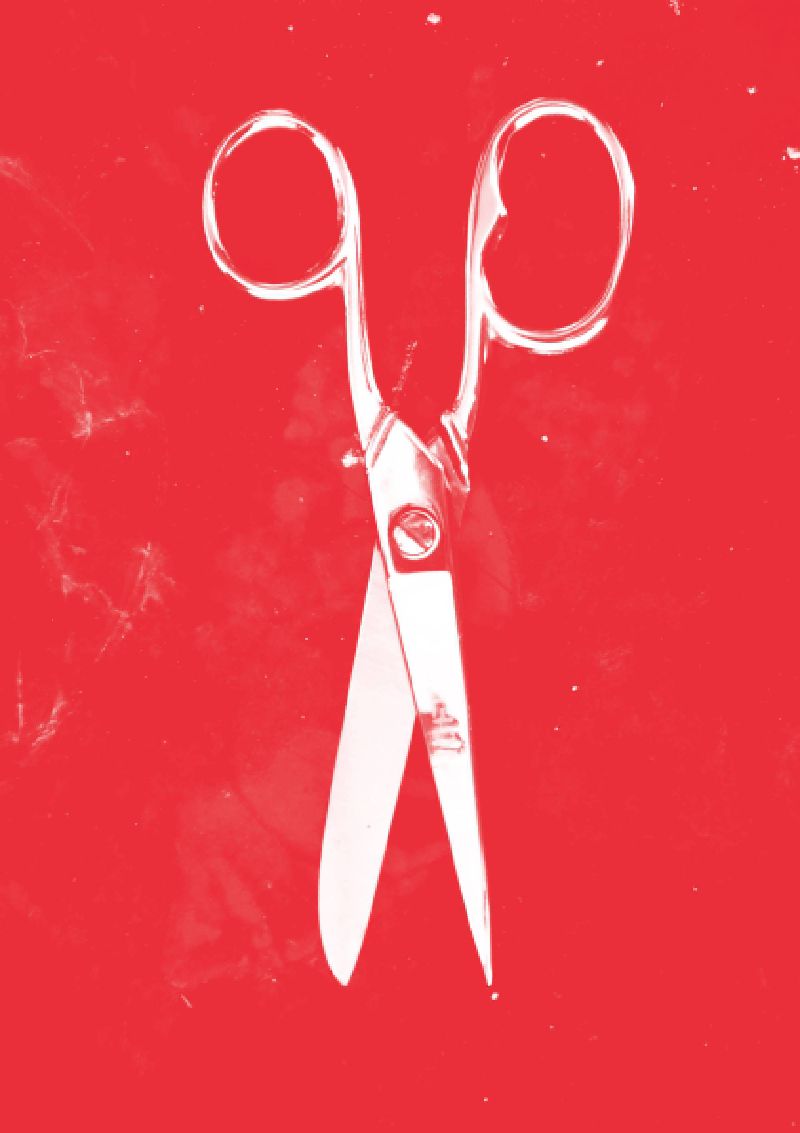 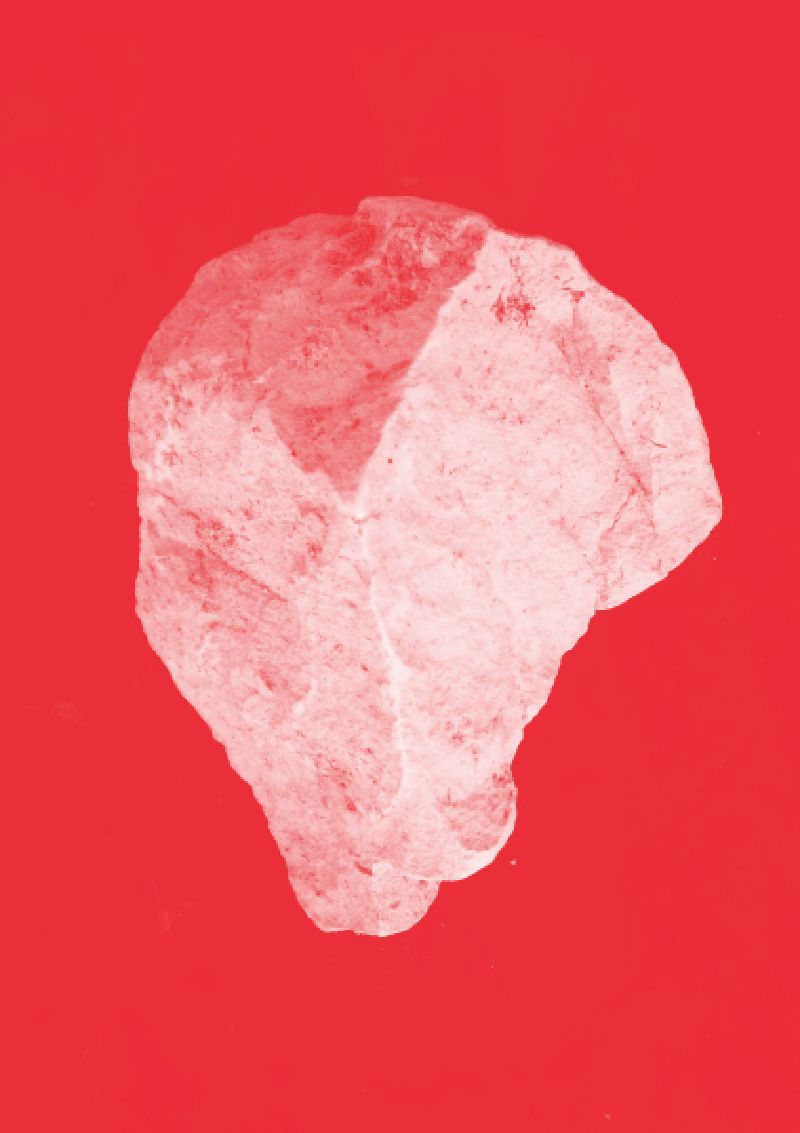 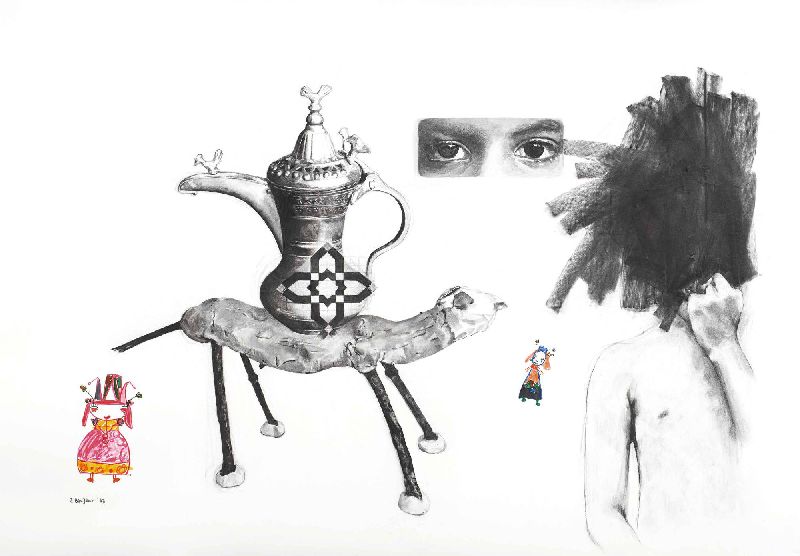 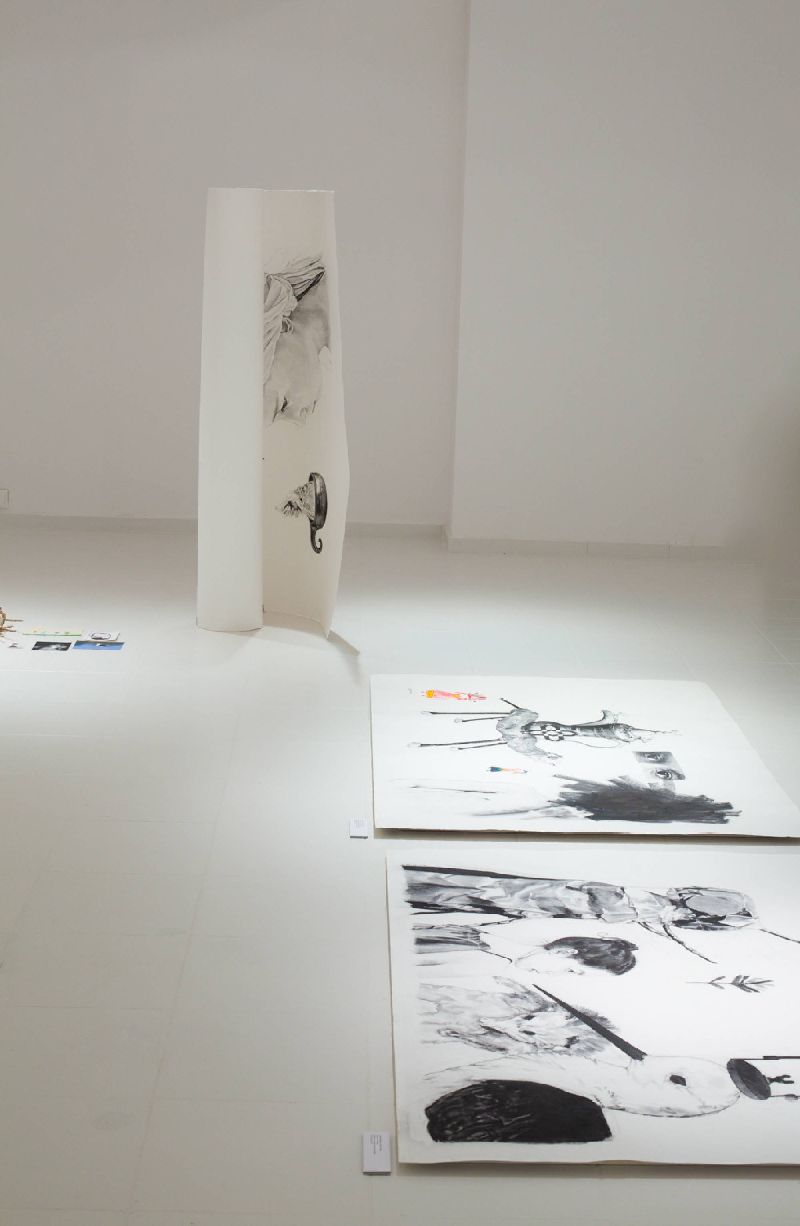 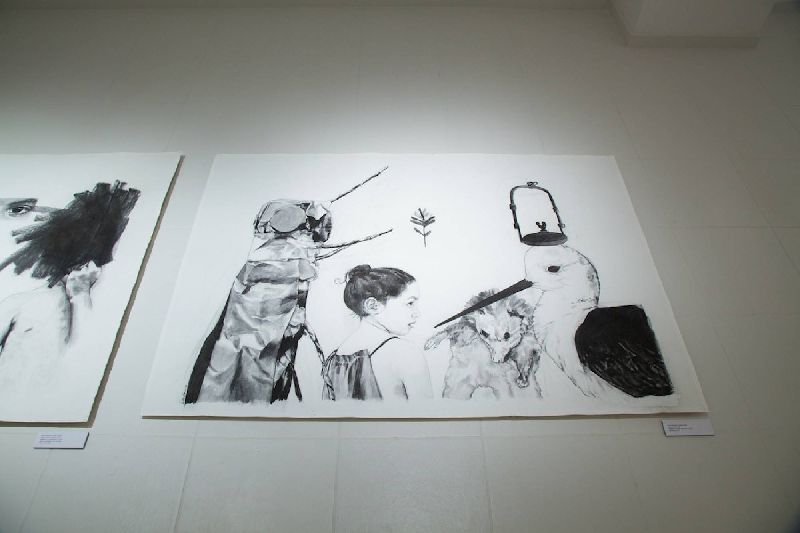 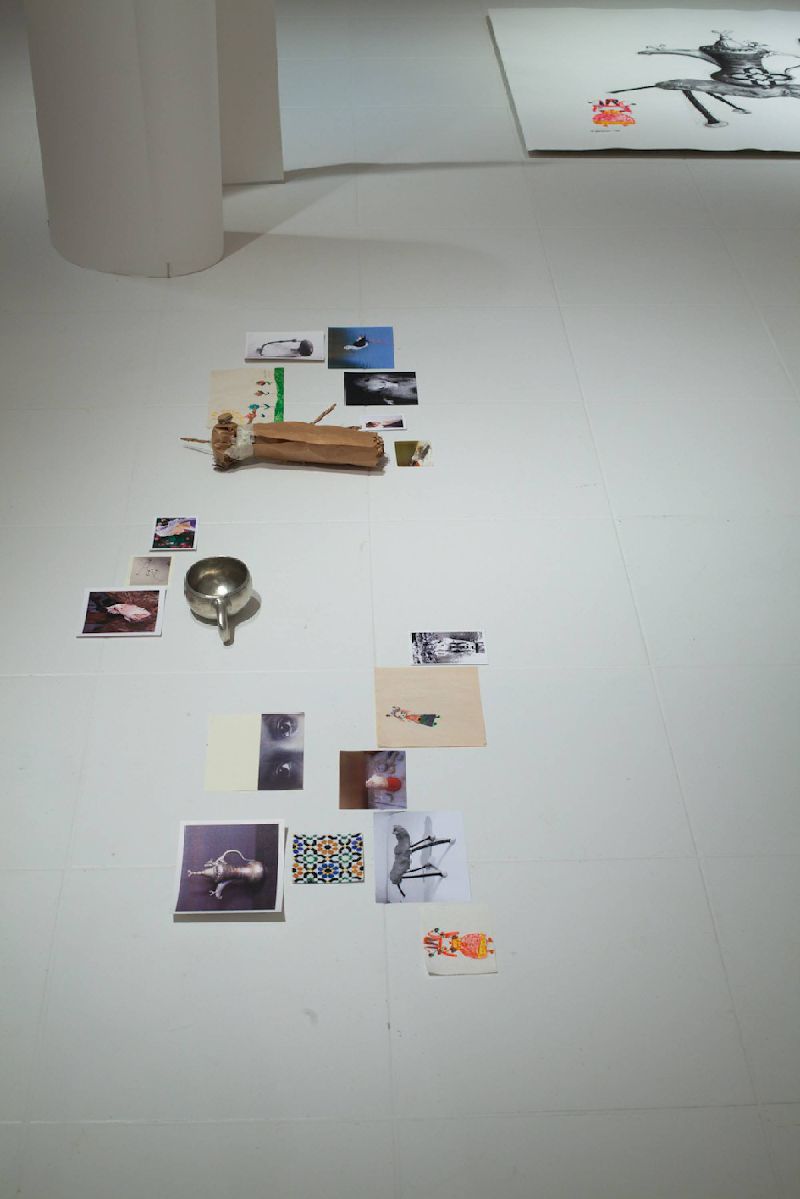 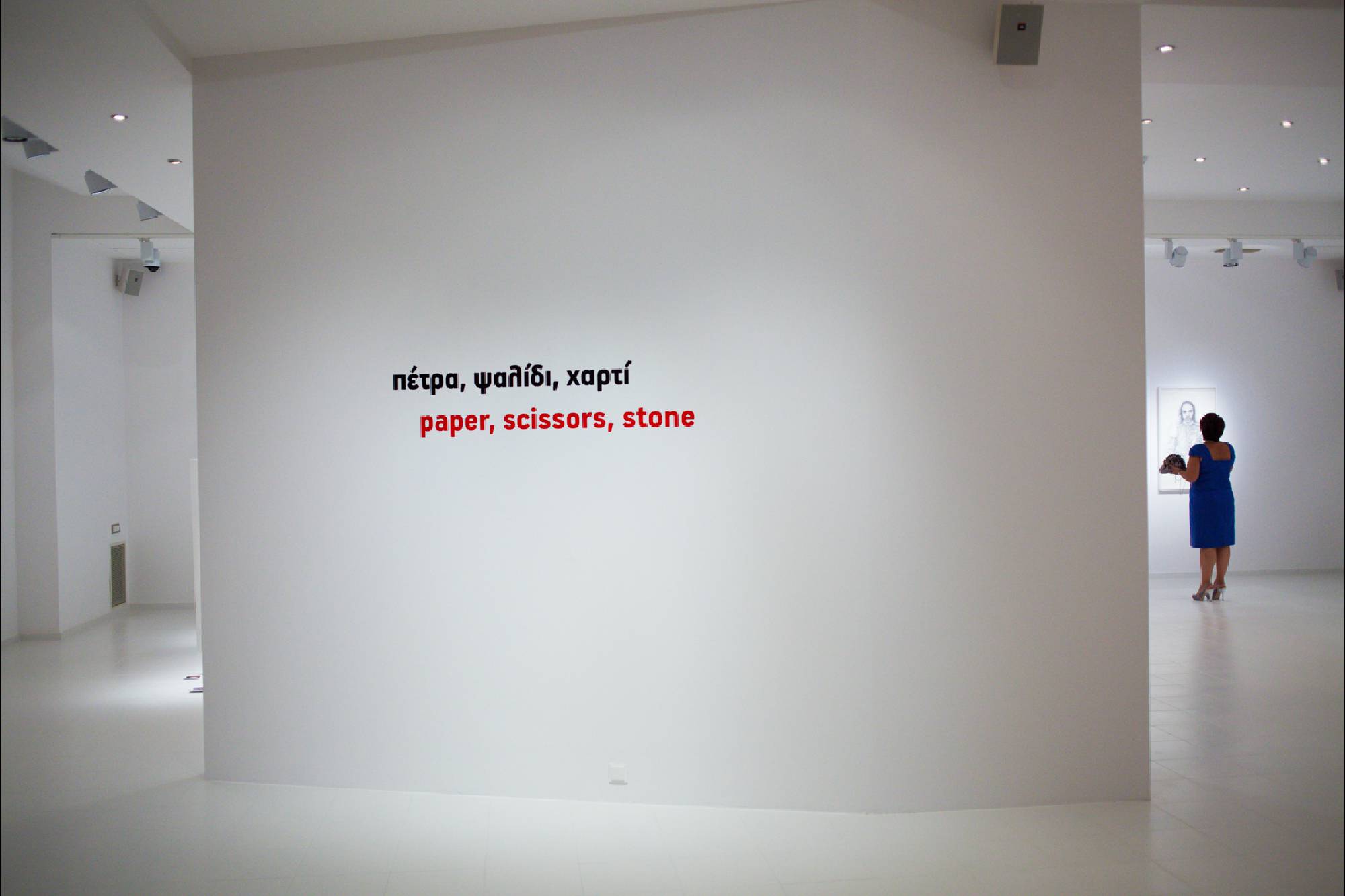 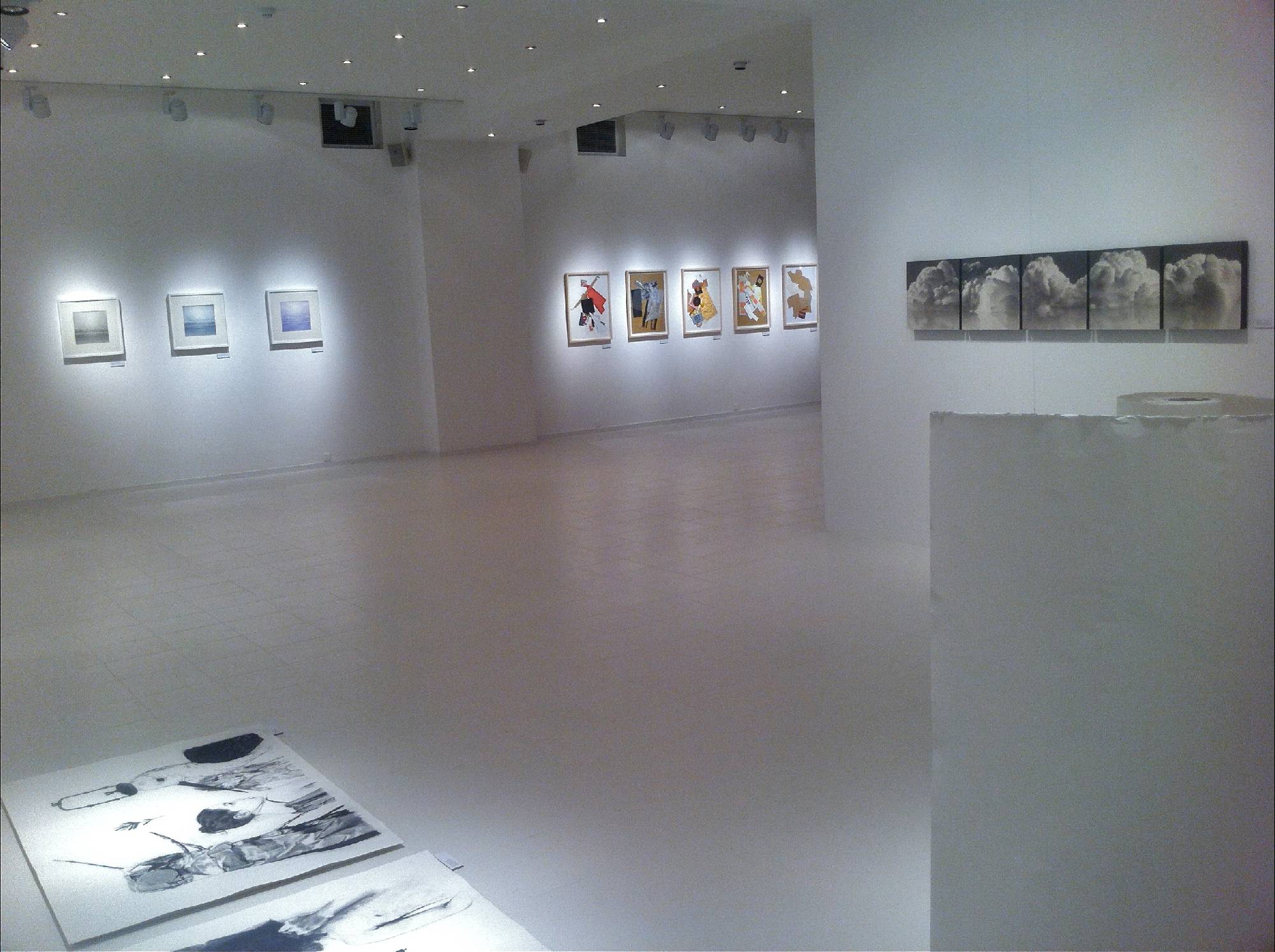 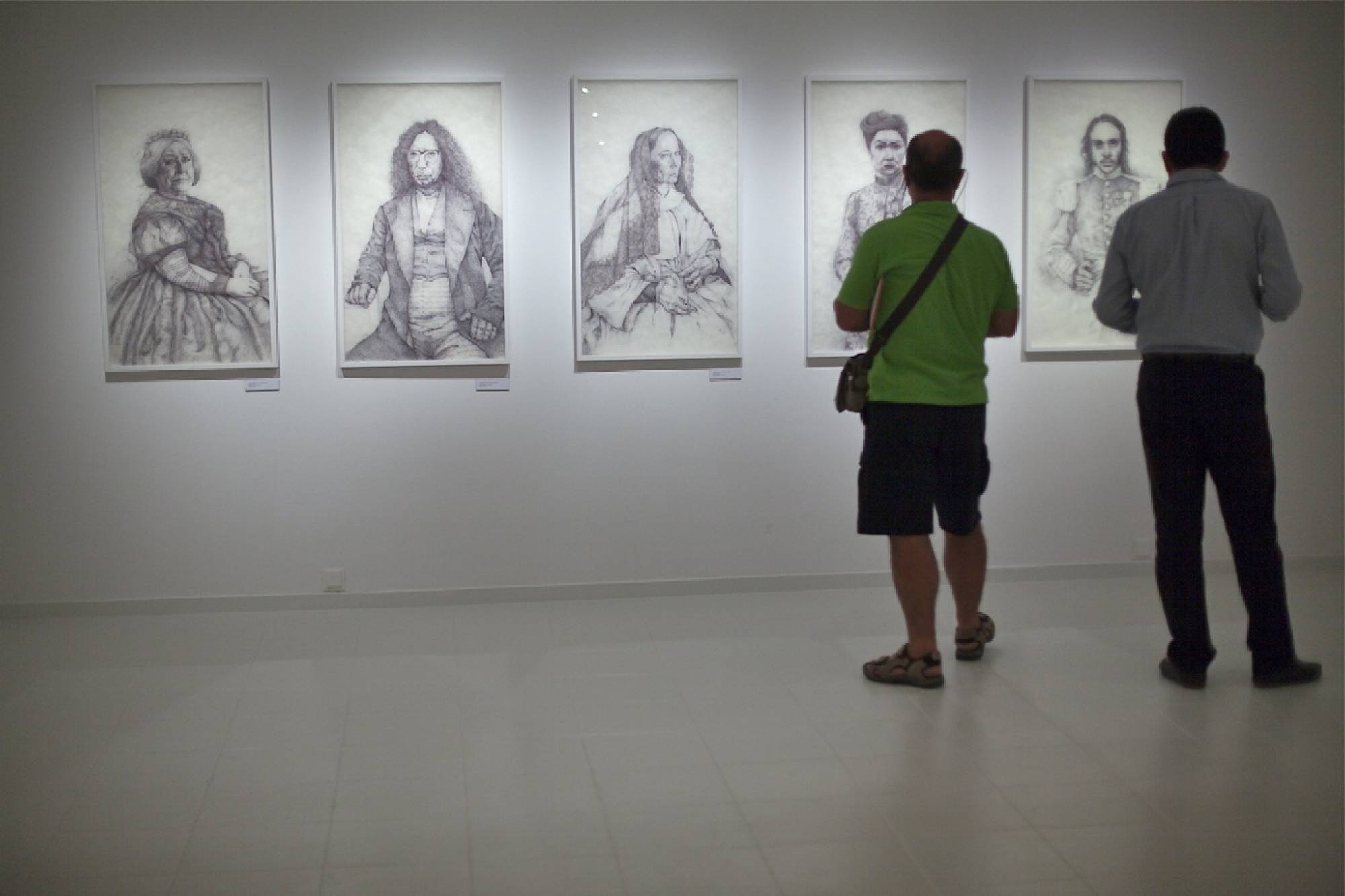 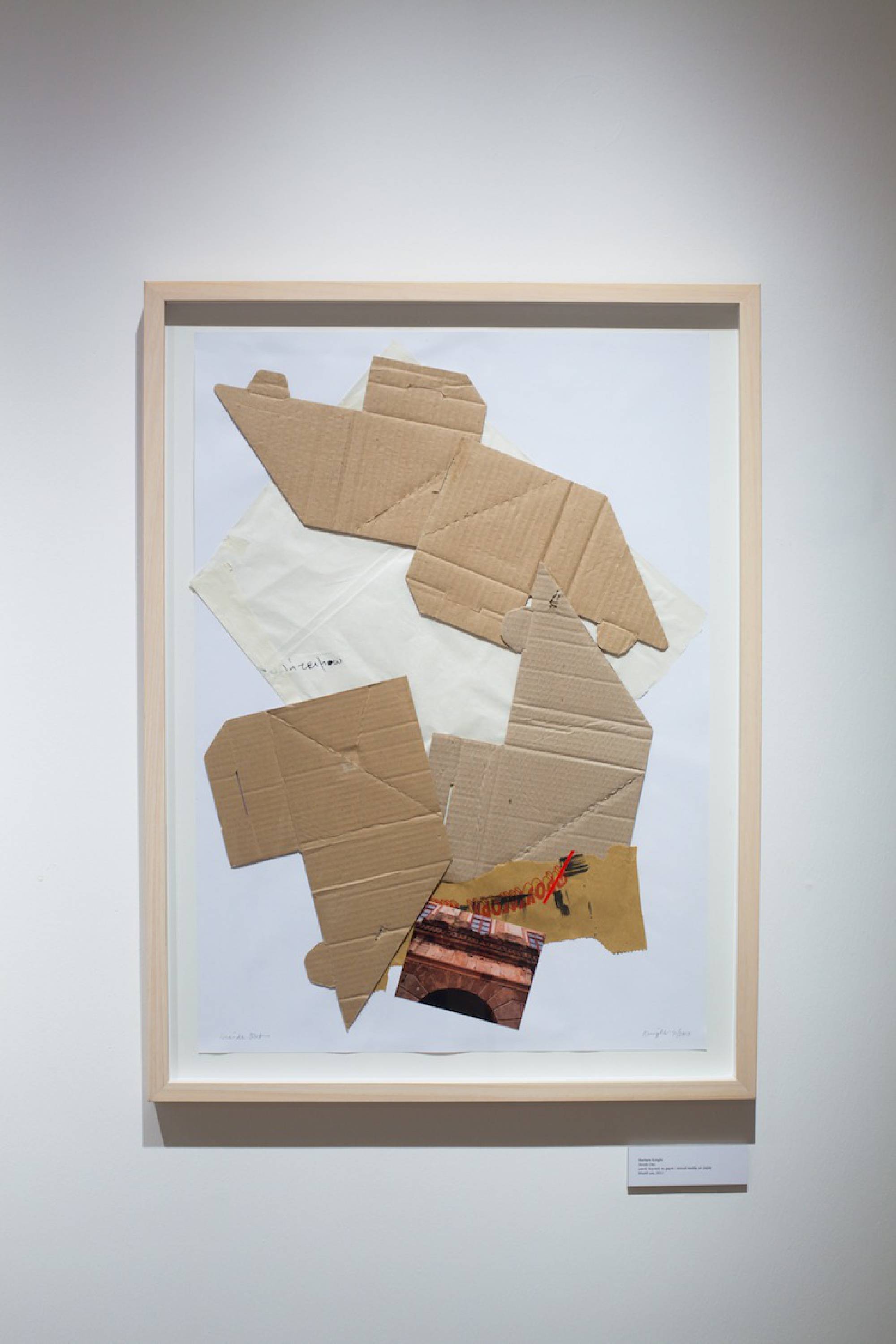 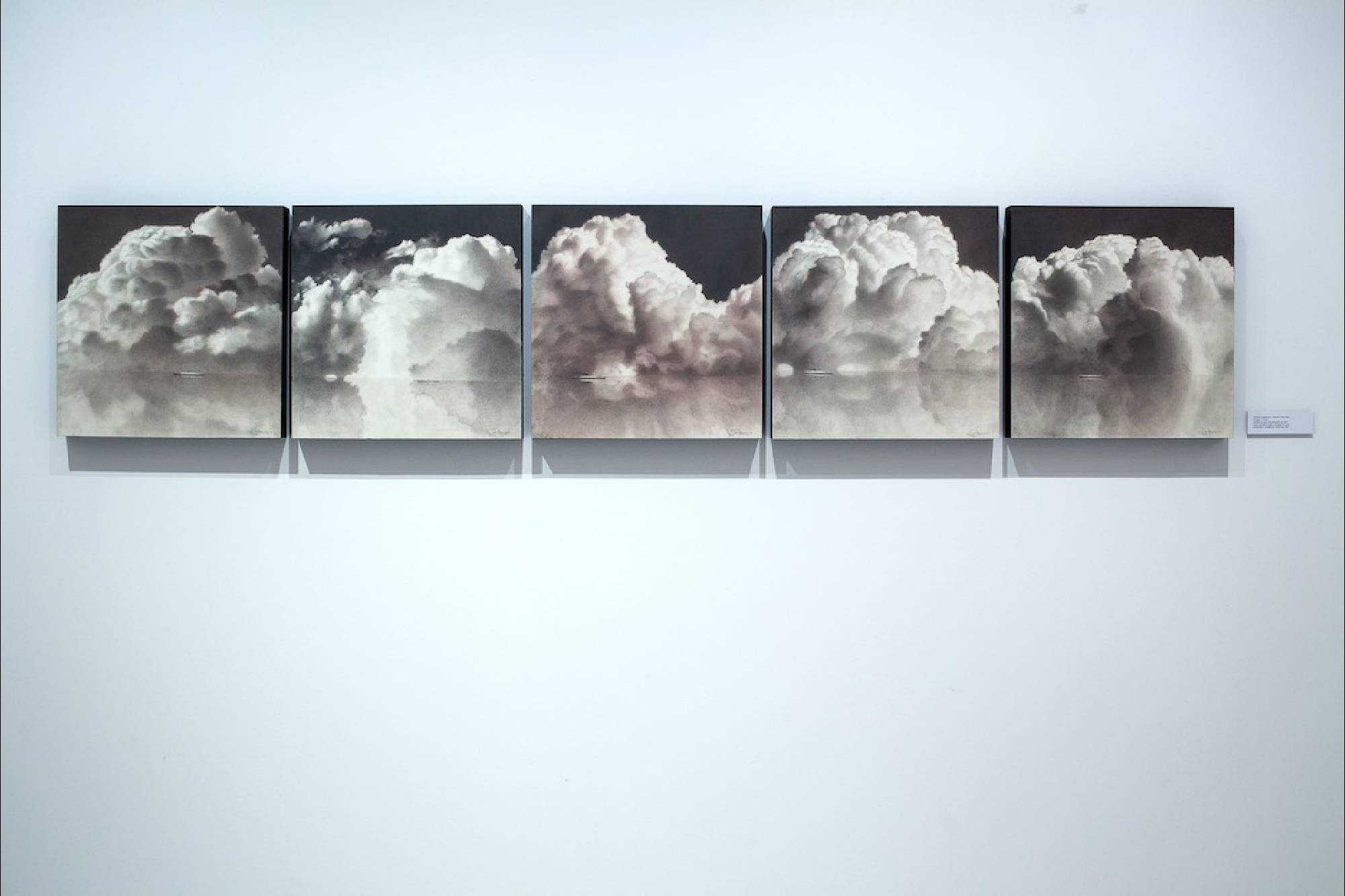 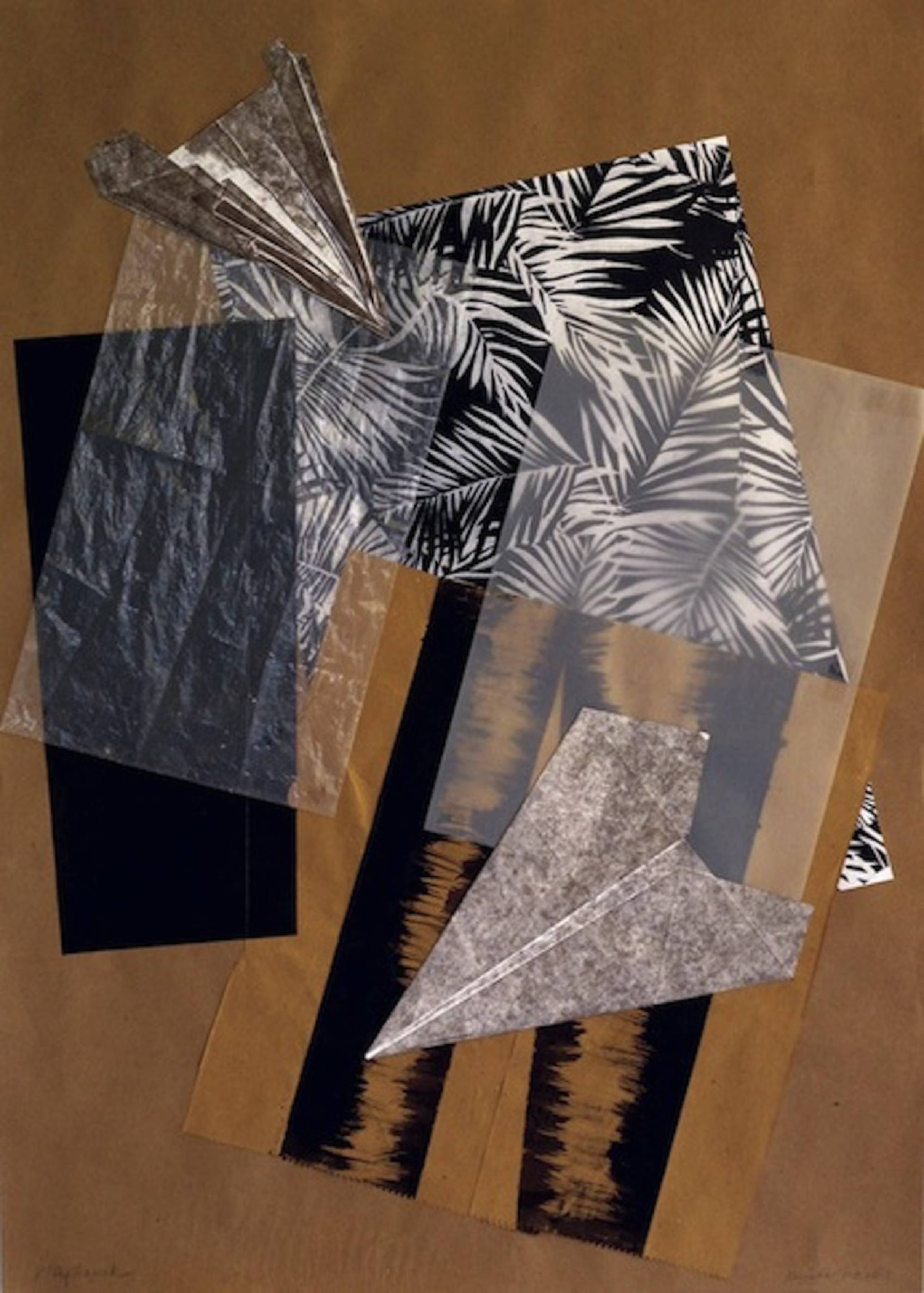 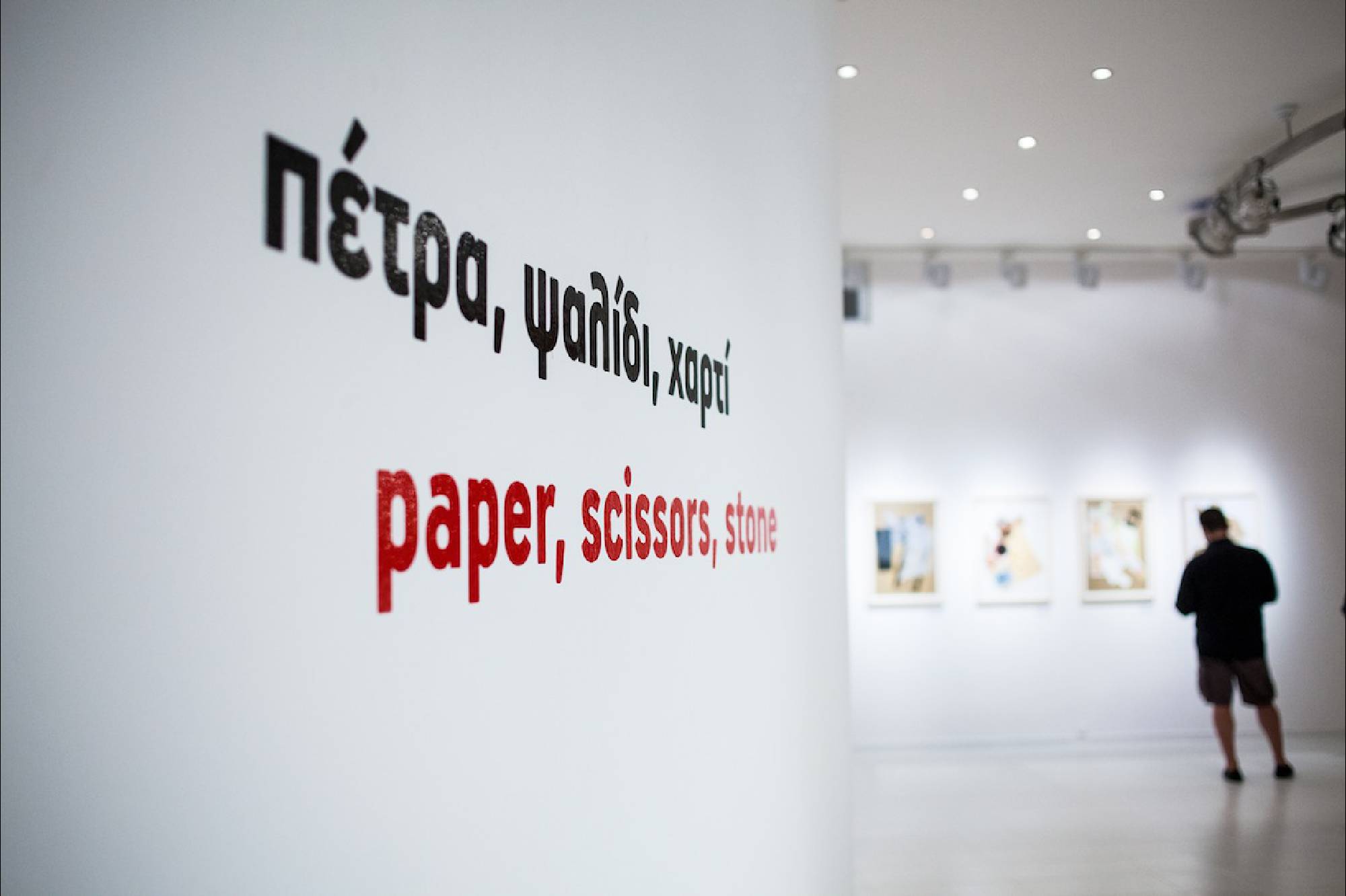 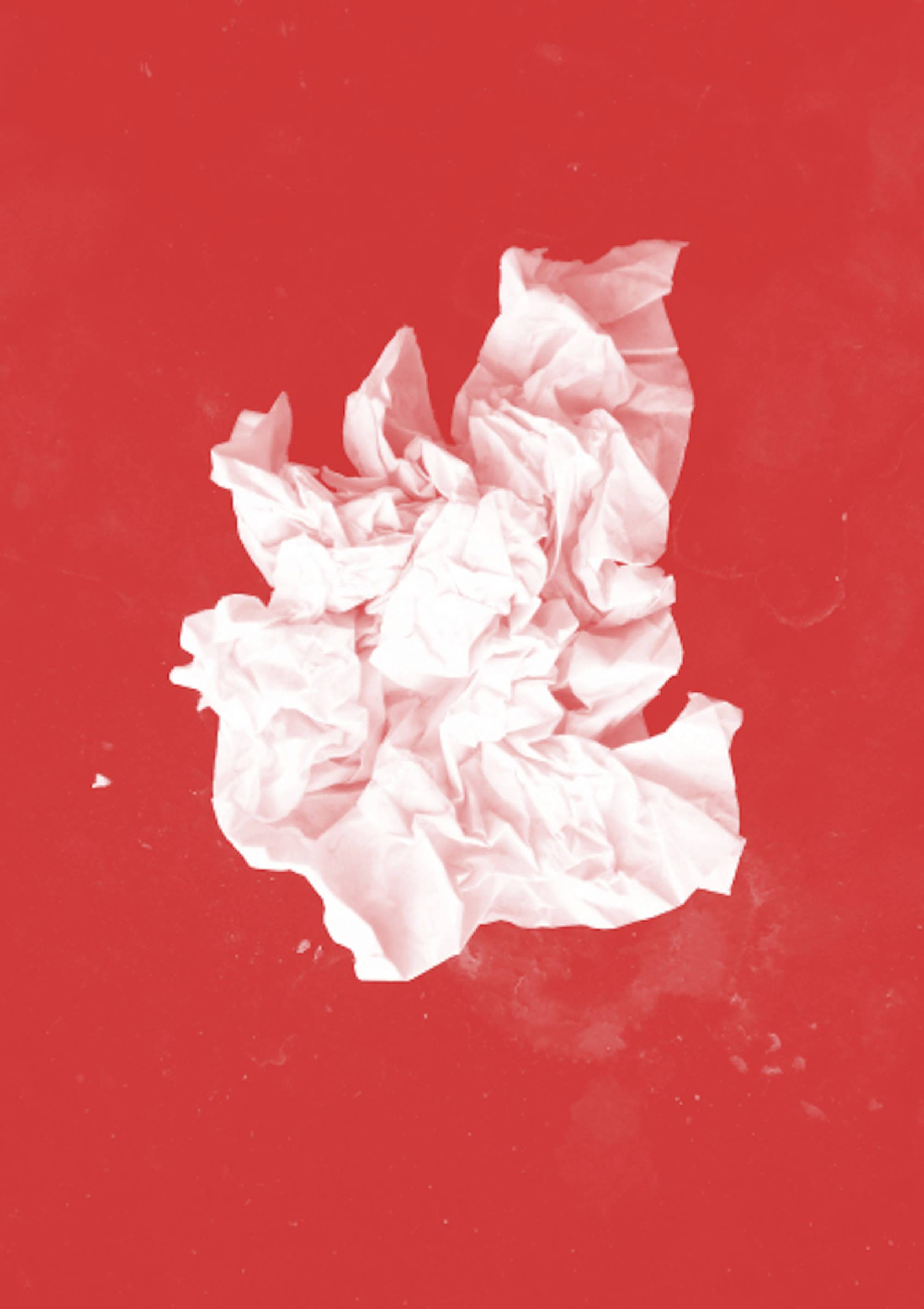 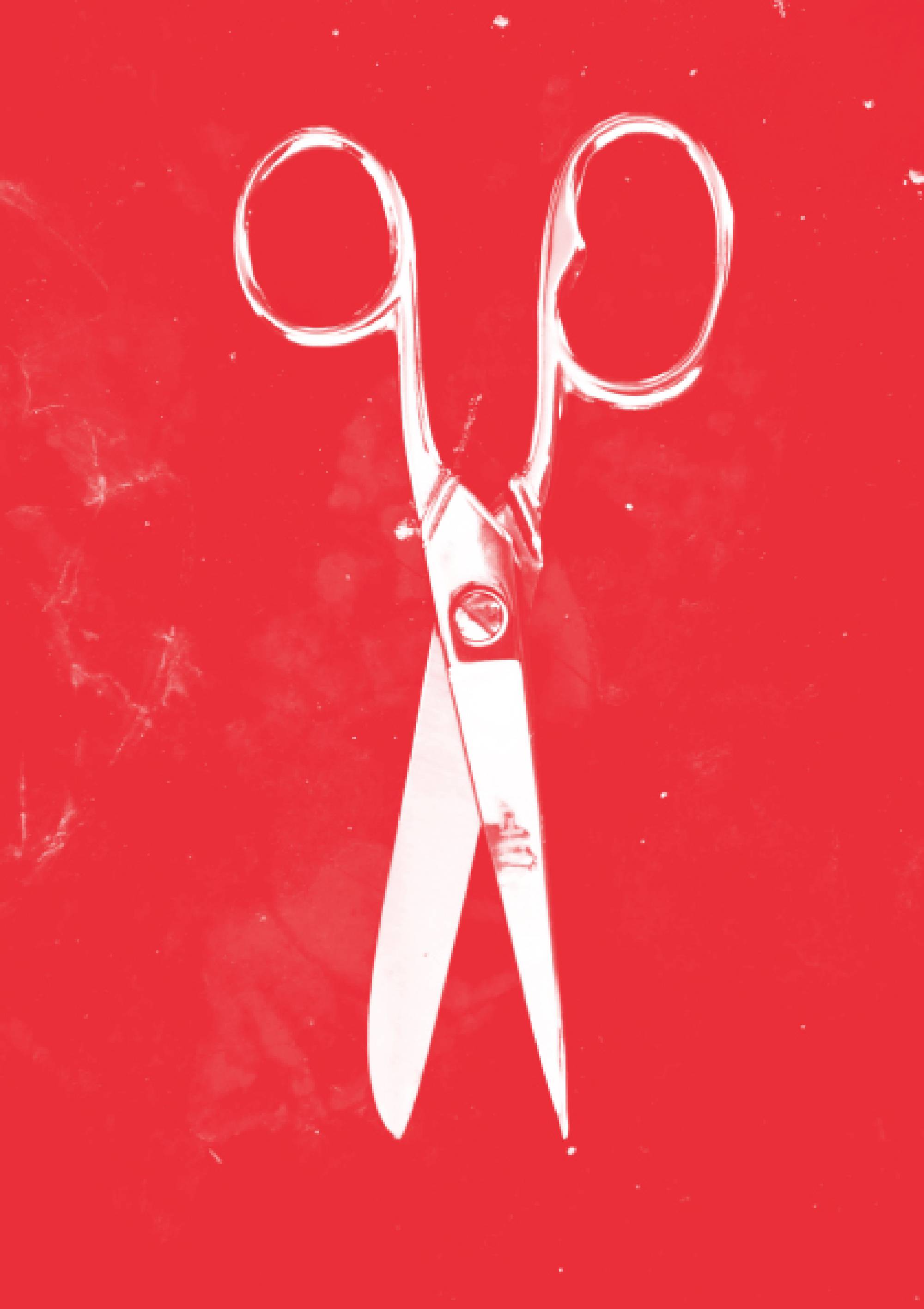 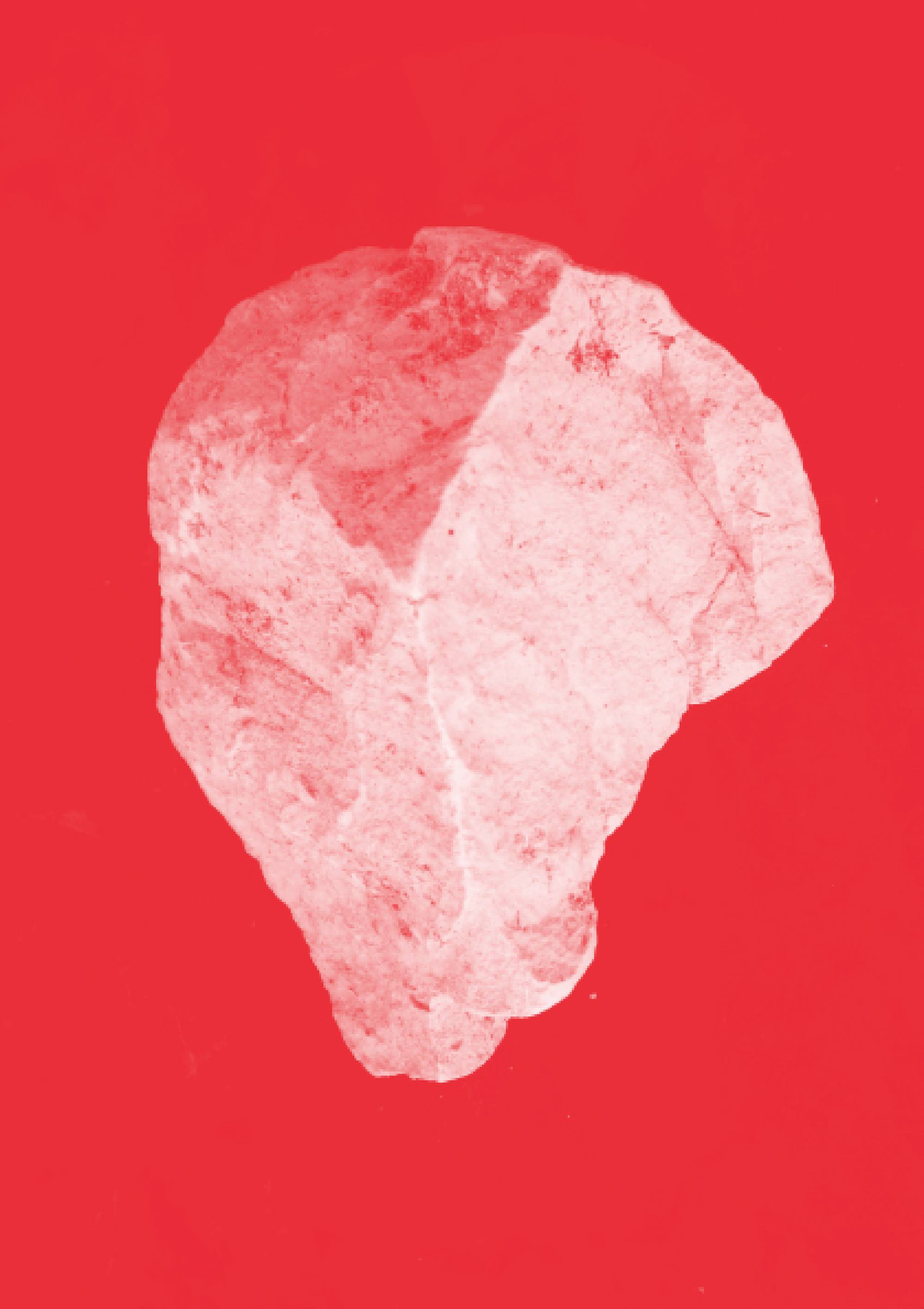 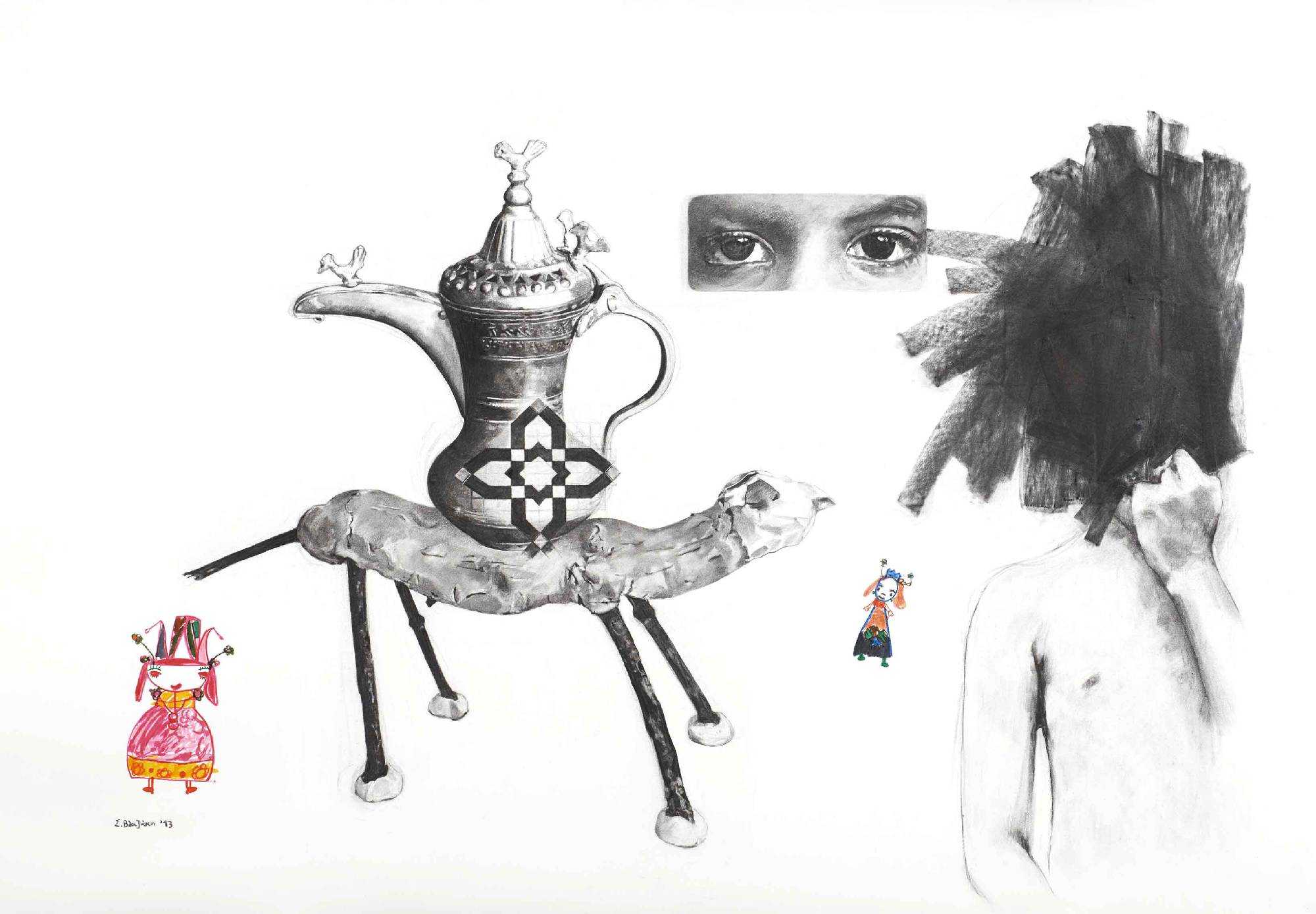 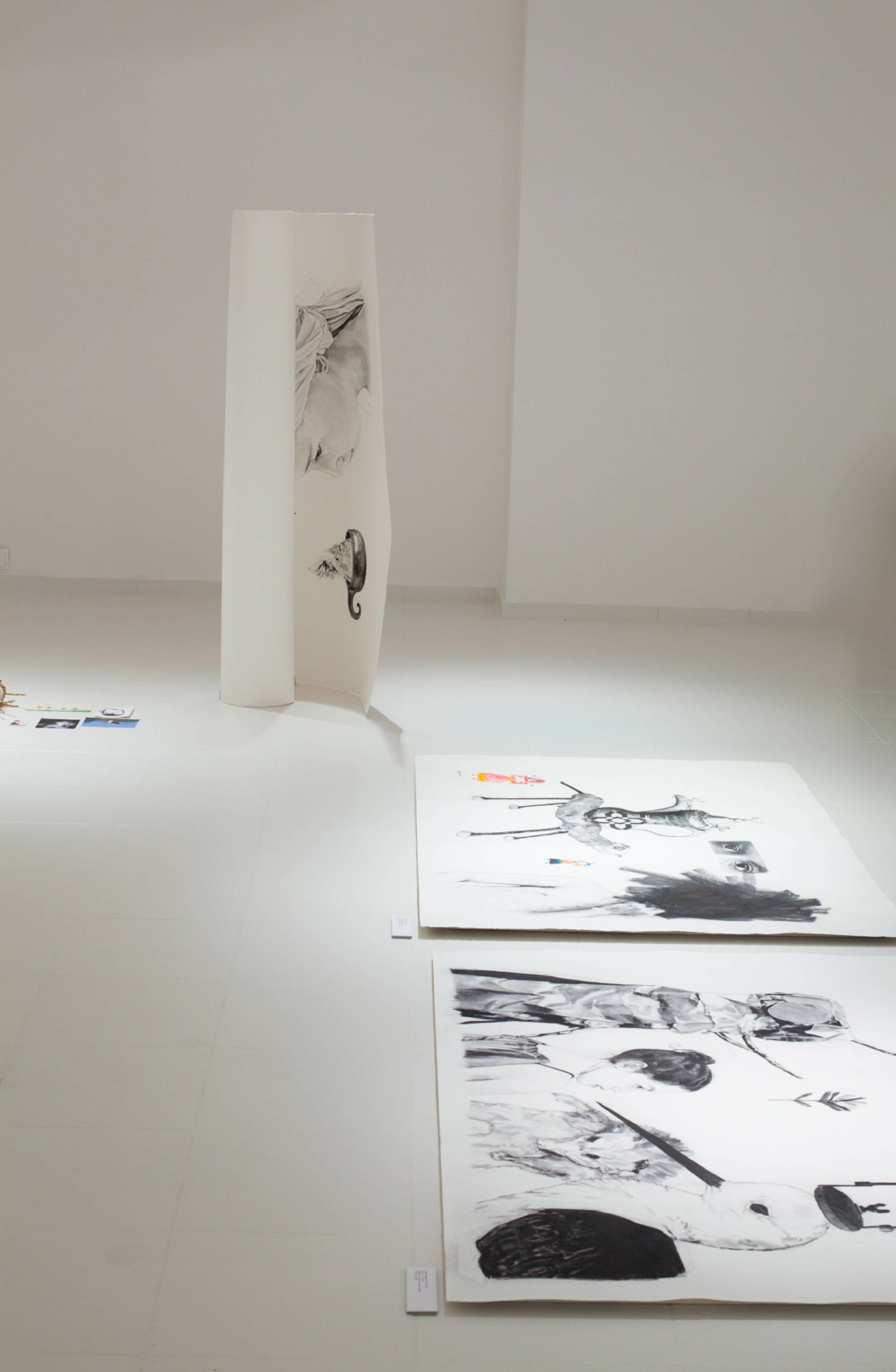 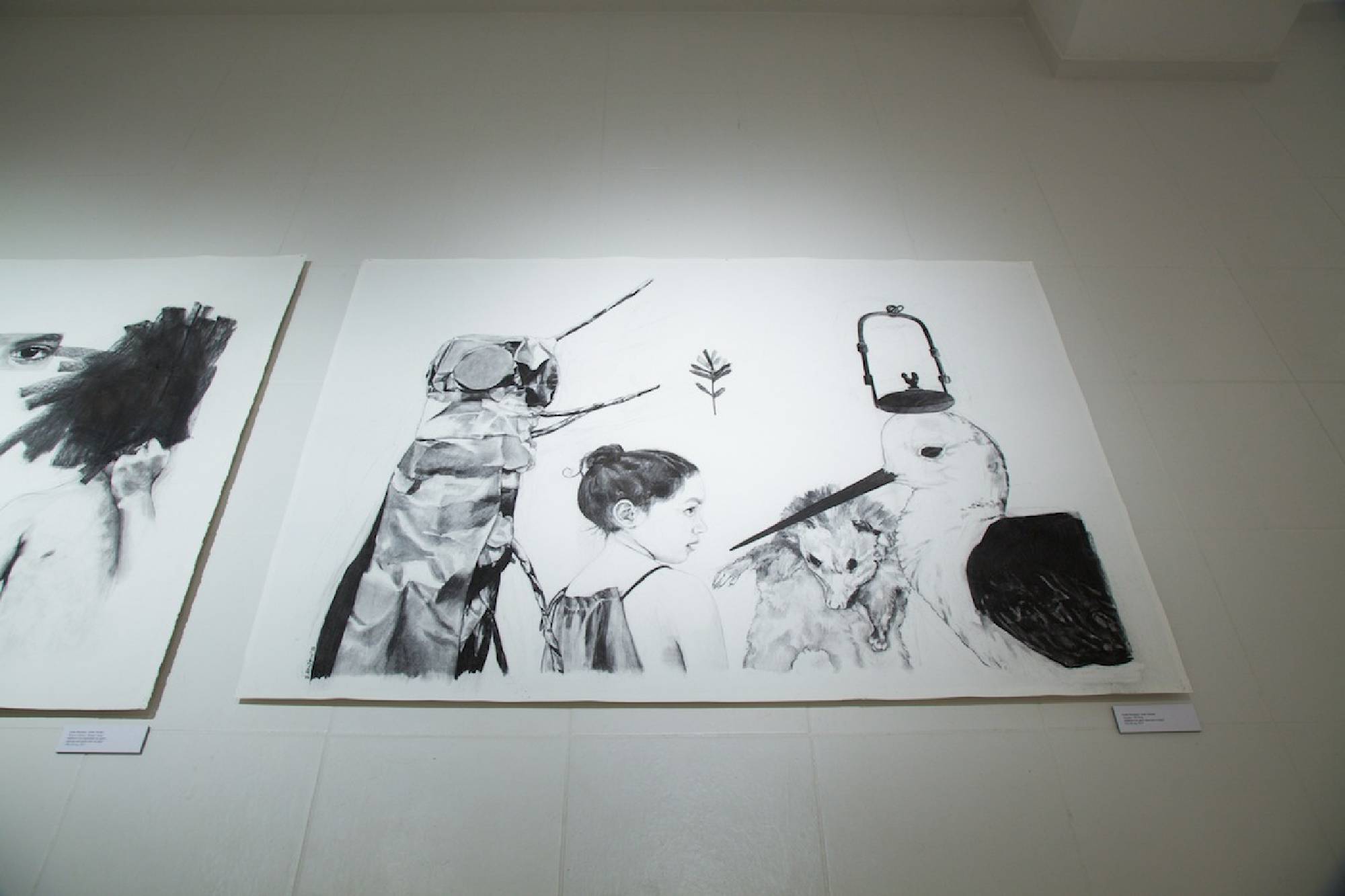 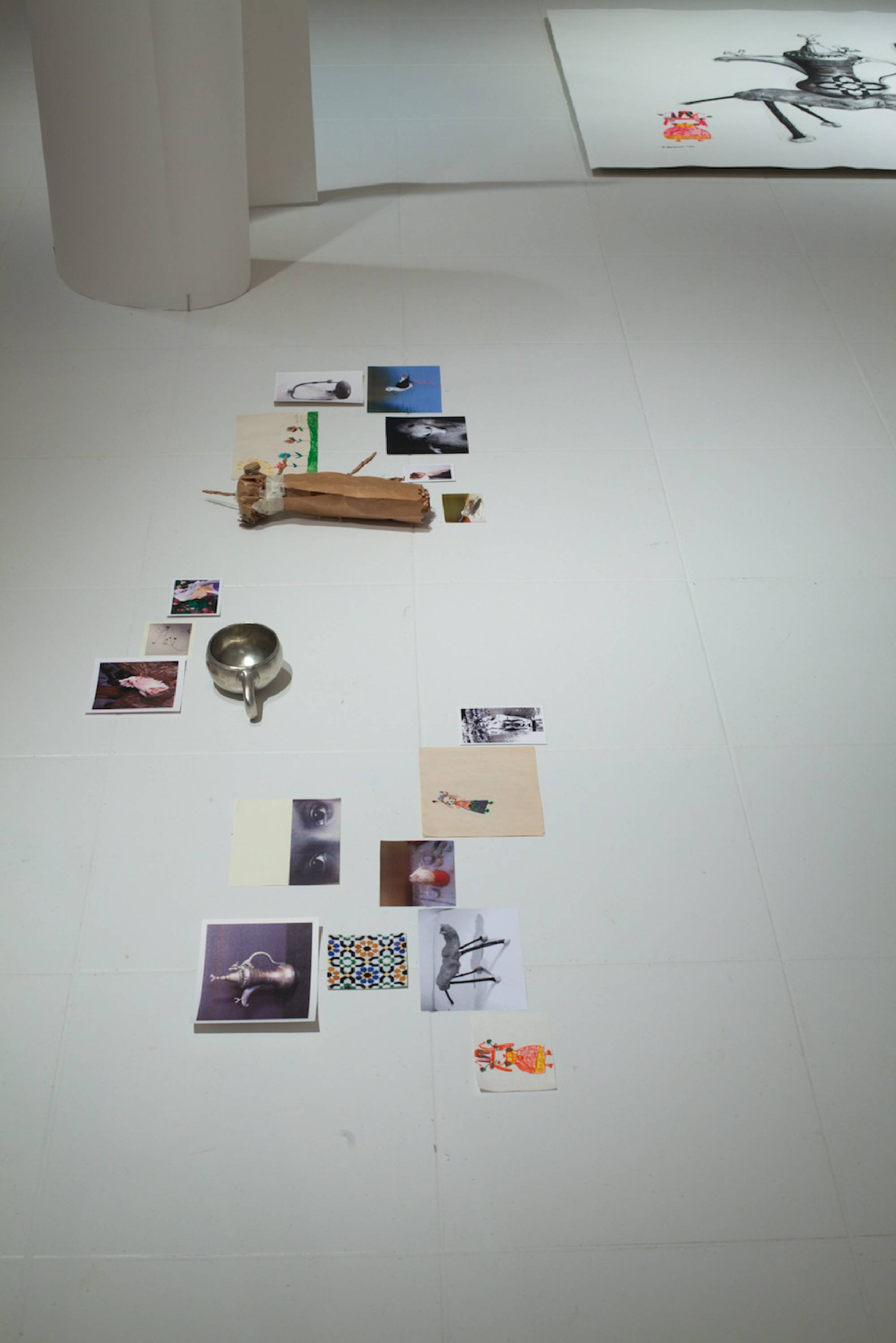 Photos by Giannis Klouvidakis, Sofia Mavroudis and We are still bold and beautiful